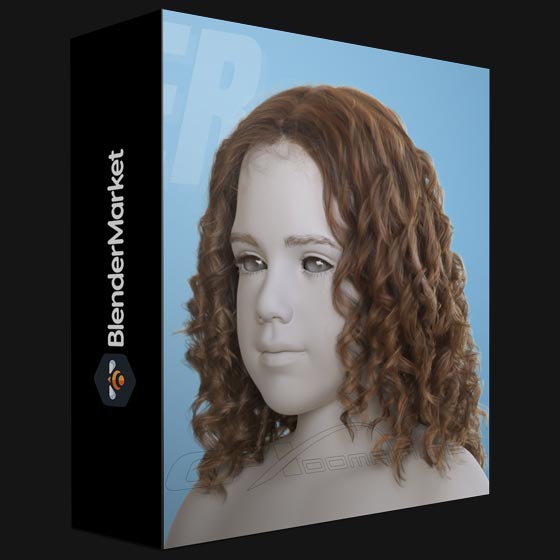 3d Hair Brush V3.2
3D Hair Brush is a powerful hair tool, including 3D brushes with Pie Menu, Use Radius Curve, Use Diameter Random, and Hair Modifier.
3D brushes can distinguish complex muscle surfaces of models and provide artists with a wonderful experience of grooming hairstyles in Blender; With multiple well-designed brushes presets, it gives efficient solutions to making varying hairstyles;
Using Radius Curve makes it convenient for us to control hair shape;
Using Diameter Random makes it possible to randomize the thickness of hair in just one particle system.
Modifier gives us an opportunity to add modifiers layer by layer until we get a good result and it doesn’t destroy any hair shape we created before.

What’s This About “Onions?”
You may be familiar with the term onion skinning, a traditional animation technique that enables the animator to see previous drawings through the page while drawing a frame. The effect is so essential to an efficient hand-drawn animation workflow that the majority of digital 2D and 2.5D animation packages include onion skinning features natively.

Which, you know, makes total sense. Having a visual reference for previous or later frames, the animator can make informed decisions while toiling away on the current frame. As Jim Gaffigan says, “It’s so simple.”

3D animation applications are often the exception. 3D applications generally forgo robust onion skinning features and animators are expected by their applications to animate ‘in the blind.’

The Toolkit contains more advanced tools created for Geometry Nodes workflows. For v0.1, the primary focus of the Toolkit was on camera culling and LOD tools. Since v0.2 we can also generate points procedurally so there are a lot of new nodes to provide advanced arrays and instancing.

Camera Culling allows us to automatically optimise an instance-heavy scene as we can restrict instances only to the area within view of the camera.

LODs (Levels of Detail) allow us to further optimise a scene by reducing the visual fidelity of distant meshes. The LOD tools in this pack give controls over distance limits for different LOD meshes.

The generator nodes first introduced in v0.2 allow for much more complex positioning of instances which we can push into areas such as architectural form finding and motion graphics.