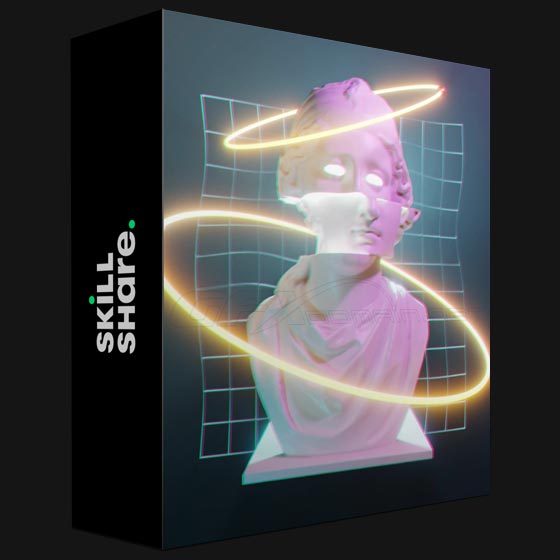 In this class, I’ll walk you through the simple and beginner friendly process of creating a Vaporwave style animation in Blender.

Vaporwave is both a musical and a visual genre of artwork. The visual aesthetic is defined as “incorporating early Internet imagery, late 1990s web design, glitch art, and cyberpunk tropes, as well as anime, Greco-Roman statues, and 3D-rendered objects”.

In this class we’ll be focusing on the visual aesthetics of Vaporwave to create our animation.

On Skillshare, I specialize in clear, easy to follow beginner’s classes. We’ll go through each process, step-by-step, to prevent as much confusion as possible.

We’re using Blender for this tutorial, which is an amazing and totally free 3d software. The only barrier to entry is having a computer to run the software on.

Creating a heavily stylized animation loop is a really desirable skill to have as a 3d artist, however it doesn’t need to be difficult. We’ll go through the entire process of creating this animation from a beginner’s perspective to avoid as much confusion as possible.

In this class you can expect to learn:

Blender Interface and Tools: We’ll learn about many basic tools and interface elements within Blender while building and animating our statue.
Modeling: To achieve our Vaporwave aesthetic, we’ll be altering a 3d scanned Greco-Roman statue.
Lighting: We’ll set up a stylized lighting scheme including volumetric lighting.
Shading: Which can give objects the appearance of glowing neon lights, or golden metal.
Animating: We’ll create a subtle looping animation featuring our Vaporwave statue.
Rendering: Lastly, we’ll render our final animation in Blender so you can share it with your friends and family on social media.