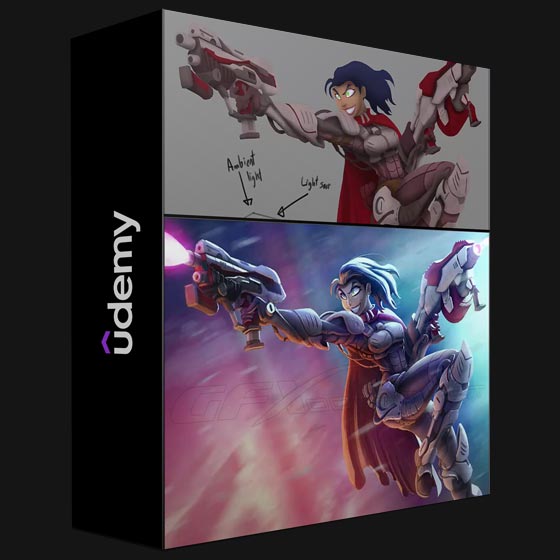 Learn to Design an awesome character for video games and other media.

This course will cover the design phase of one character meant for a video game production and transferable to other media, from first conception to fully rendered splash or key art for promotional purposes. Students will learn how to initially thumbnail a design before taking it to a rough and then finalized front/back character rotation, including this character’s costume and equipment. Further exploration into this character’s backstory and personality will also result in several design sheets. These include an expression sheet, passive acting pose sheet and action pose sheet. Students will also later delve further into development of this character’s in-game costume and equipment, and even be introduced to producing basic thumbnails or keyframes to explore how this character may move during gameplay or combat. Finally, students will be introduced to a simple, step by step method that will take them from thumbnail phase to a finished, polished and full colour render of their character. This final volume covers everything from nailing down a solid pose, dynamic composition, colour choices and preparing the image to be painted. A series of lighting and shadow passes, followed by a detailed polish and special effects step will complete the illustration. Upon completing this series, the student will have an in-depth glimpse into what it takes to design a single character for video games or other media.

More about the Instructor:

Colin Searle is a Designer and Illustrator living in Toronto and working fulltime as a designer for Elliott Animation, currently taking on freelance and client work from studios like Ubisoft and several others. He likes to exercise and draw, and he’s not sure which one he likes doing more!
Who this course is for: